Baitalsky – Notebooks for the Grandchildren. Recollections of a Trotskyist Who Survived the Stalin Terror PDF

Mikhail Baitalsky
Notebooks for the Grandchildren. Recollections of a Trotskyist
Who Survived the Stalin Terror
With a Foreword by
Roy Medvedev 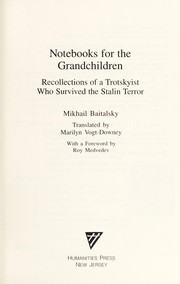 Notebooks for the Grandchildren: Recollections of a Trotskyist Who Survived the Stalin Terror
Humanities Press, New Jersey, 1996, pp. 427

‘LIFE HAS become better, comrades, life has become more joyful’, announced slogans on the walls of the labour camp barracks at Vorkuta for badly-fed, badly-housed prisoners to read each day as they went to and from forced labour in the mines. These phrases were taken from a speech by Stalin.

Baitalsky, a member of the Komsomol in the 1920s, who as a boy had fought against Denikin, the leader of the counter-revolution in Southern Russia during the Civil War, was later to be arrested three times as a supporter of the Trotskyist opposition (even after the Trotskyists in Russia had all been murdered). He served two terms in Vorkuta labour camp with others dubbed ‘enemies of the people’, referred to as Trotskyists, which had become a general term of abuse. It was not difficult to become an ‘enemy of the people’, for anyone making an irreverent joke about the Stalinist bureaucracy, organising a school on Marxism or Leninism without permission, being related to an ‘enemy of the people’, falling foul of the local bureaucracy – all these could result in a sentence of from five to 25 years in the camps. This was in addition to those accused of sabotage, largely engineers, because they had failed to complete a five year plan in the stated time. And, as we know, those Russian servicemen captured by the Germans during the Second World War returned not as heroes, but also to be incarcerated. With regard to prisoners of war, Baitalsky states that the Nazis knew that the Geneva Convention need not apply to captured Russians, because Stalin’s government would make no complaint at their treatment. In the camps also were members of foreign Communist parties disbanded by Moscow. Baitalsky claims that at any one time the camps held at least 15 million prisoners. There were also common criminals in the camps, but these (as in the Nazi concentration camps) were given trusted positions over the other prisoners, and generally had shorter sentences.

The members of the bureaucracy and petty bureaucracy, in competition with each other in the finding of ‘enemies of the people’, were as likely as anyone else to end up as prisoners in the camps. Baitalsky tells of the executions at Vorkuta, prisoners hurried across melting rivers to be shot down by machine-guns, 50 men at a time. Later, the bureaucrat in charge of these executions was himself arrested and was heard screaming from a window of the Kotlas prison where he awaited execution: ‘Tell the people that I am Kashketin! I am the one who shot all the enemies of the people at Vorkuta!’ Baitalsky remarks: ‘And when these Moors had done their duty, they were charged with exceeding their authority and shot.’ In this way Stalin wiped his hands clean of the terror.

Baitalsky remained a Leninist, having read Lenin’s Testament 30 years before it became generally available. With regard to Trotskyism, he was unaware at that time as to whether any remained anywhere in the world. However, he raises some important questions for us with regard to the nationalisation of property. Nationalisation of the means of production has always been regarded by us as more efficient than production in private hands, in that planning should result in a higher standing of living for the population. However, as Baitalsky points out, the nationalised economy of the Soviet Union became distorted because it was harnessed firstly to the needs of the state – the large bureaucracy (which required private clinics, private shops, private schools, etc), the security services, the military, ‘show’ or status projects, such as space exploration, and so on. Therefore, the standard of living continually lagged behind that of the Western world. To allay discontent, shortages were blamed upon ‘enemies of the people’ or ‘Trotskyists’ who were sabotaging Socialist development.

Apart from this distortion of the economy, it is a fact that technological invention requires intellectual freedom, which did not exist in the Soviet Union. Baitalsky spent some of his imprisonment in the First Circle (also written about by Solzhenitsyn). In this prison were gathered engineers and others with technological knowledge, instructed to ‘invent’ within a specified time an object of technology already in use in the West. Trade magazines from the West were treated as blueprints, and were locked away in a safe.

Baitalsky speaks also of the changing face of the working class in a peasant country. Following the forced collectivisation, starving peasants poured into the towns, and sat begging homeless in the streets. Stalin met this problem by reintroducing the Tsarist pass laws, which resulted in these dispossessed peasants being forced ‘home’ to starve. An added advantage to Stalin of these pass laws was that peasants, without any working class experience, could be introduced into the workforce in an organised manner.

Baitalsky also writes of anti-Semitism in the Soviet Union, and claims that after the Second World War when the Nazi concentration camps were revealed to the world, the population of the Soviet Union were not told that Jews were the main victims. Every nationality was stated to have been found in the camps, but not Jews, but by this time ‘cosmopolitanism’ had also become a dirty word in Russia. This meant that Jews had relatives and other contacts outside Russia, and were therefore suspect.

In the light of the present war by Russia against the Chechens, it is of interest to know that there is a history relating to this, for the Chechens were one of five peoples deported from their homelands as ‘unreliable’ when the Soviet Union entered the Second World War. History might not always repeat itself, but it certainly colours events. For instance, Baitalsky states that one of Stalin’s great heroes was Ivan the Terrible!

Baitalsky writes also of his private life, his first wife and the mother of his two children, whom he met in the Komsomol, but who became a committed Stalinist, and his friends from Komsomol days who disappeared into the camps, or who lived in poverty. This is a book that’s well worth reading, it’s thought-provoking, and poses many questions on the nature of bureaucracy and the state. 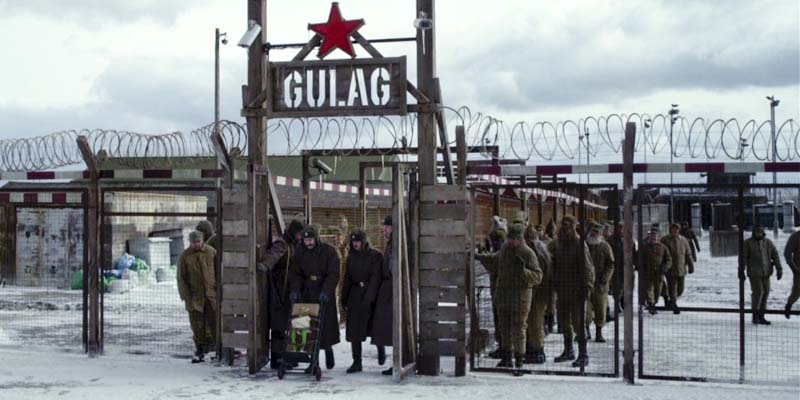 In Russia stanno tornando i Gulag?

In Russia’s Vorkuta, the remnants of a gulag town carry on